Occurrence of wolfram, copper, cobalt and gold mineralization in the area of the Argentine Islands (West Antarctica) 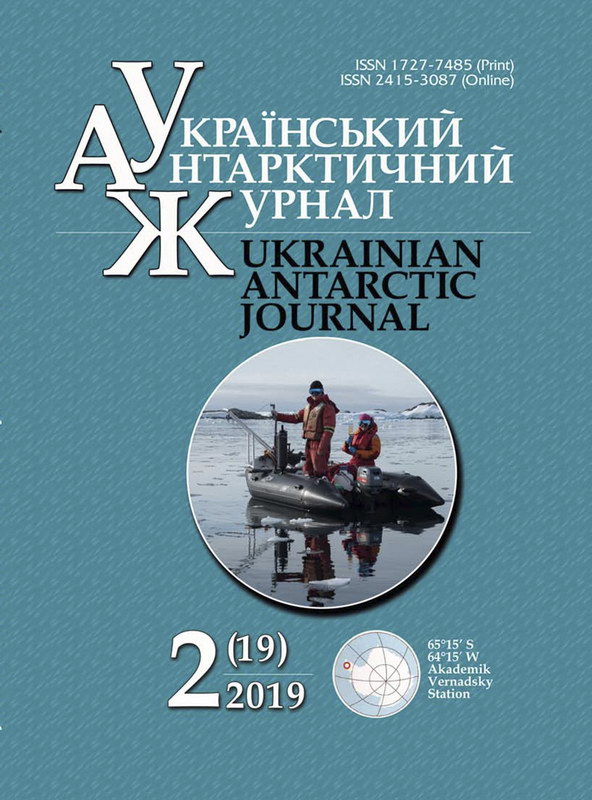 Objective. The objective of our research was to search for manifestations of ore mineralization on the Roca and Cruls islands in the Argentine Islands, West Antarctica. Methods. Samples of rocks with the manifestation of ore mineralization were taken in the field routes. Silicate analysis of the rocks was carried out using the wet chemistry method in M.P. Semenenko Institute of Geochemistry, Mineralogy and Ore Formation of the National Academy of Sciences of Ukraine (IGMOF of NAS of Ukraine). The X-ray diffraction analysis of samples was carried out using a DRON-2 diffractometer, with copper radiation (СuКα = 1.54178
Å). The samples were surveyed in the 4—65° 2θ interval of angles, with a scan step of 0.1 degr. / min. For mineral diagnostics, the catalog of reference samples of the PDF-2 database (International Diffraction Data Center, ICDD) 2003. The chemical composition of minerals was examined using a JXA-733 X-ray microanalyzer (Jeol, Japan) using wave and energy-dispersion spectrometers. Contents of trace elements in the rocks were determined using the ICP-MS and quantitative spectral analysis methods. The validity of analyses was checked by means of determination of international and Russian reference samples GSP-2, VM, SGD-1А, ST-1.
Concentration measuring errors were 3 to 5 wt. % for most elements. The quantitative spectrum analysis was carried out in IGMOF of NAS of Ukraine. Petrographic studies of rock sections were carried out using a MIN-8 polarized-light microscope. Results. Wolfram, copper, zinc, and lead were found in the minor intrusion of lamprophyres in the Andes complex granodiorites, on a small island of the Roca Islands. This semi-ring-shaped minor intrusion up to 0.5 m thick rooted in the not yet crystallized granodiorite intrusion. The dip angle of the minor intrusion is about 70°. It showed tungsten (28.7 g/t), copper (445 g/t), zinc (207 g/t), and lead (123 g/t) mineralization. In the eastern part of one of the Cruls Islands, a steep (dip azimuth NW 345°, angle 82°) tectonic zone up to 10 m wide was studied. Three metasomatic belts, one of which is up to 0.5 m thick, are associated with this zone. Metasomatites include pyrite-plagioclase rocks, epidosites and pyrite-epidote rocks, which have been formed due to hydrothermal and metasomatic changes of granodioritic tectonic breccia. The occurrence of cobalt (800 g/t), copper (200 g/t) and gold (up to 0.3 g/t) has been
discovered. In these metasomatites, magnetite, pyrite, copper pyrite and pyrrhotite are available. Cobalt is present as magnetitic and pyritic impurities. Conclusions. During geological surveys in 2010 and 2012 the mineralization of wolfram, copper, lead, cobalt and gold was first discovered. The ore mineralization of such genesis was previously unknown in this area. The data obtained allow clarifying of perspectives of exploration activities in West Antarctica.